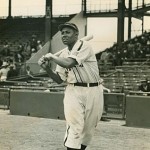 Leonard was born September 8, 1907 in Rocky Mount, North Carolina. He left school at the age of 14 because no high school education was available to black children in his hometown.

He began his Negro league career in 1933 and from 1934 until his retirement in 1950 played for the Homestead Grays. Leonard had a career batting average of .320 and usually led or was second in home runs. In 1948, he led the league with a .395 batting average. Leonard was selected to the Negro leagues’ East – West All-Star game a record eleven times.

In 1952, Leonard was offered a major league contract, but he turned it down because he thought he was too old and might embarrass himself and hurt the cause of integration. Leonard was inducted into the Baseball Hall of Fame in 1972. In 1999, The Sporting News ranked him number 47 on its list of the 100 Greatest Baseball Players of All-Time. Leonard’s biography, “Buck Leonard: The Black Lou Gehrig,” was published in 1995.