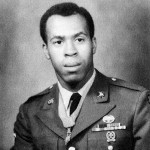 Sasser was born September 12, 1947 in Chenanago, Texas. He was drafted into the United States Army in 1967 and by January 10, 1968 was serving as a private first class combat medic in Headquarters Company, 3rd Battalion, 60th Infantry, 9th Infantry Division during the Vietnam War.

His actions that date earned him the medal. His citation partially reads, “His company was making an air assault when suddenly it was taken under heavy small arms, recoilless rifle, machine gun and rocket fire from well fortified enemy positions on three sides of the landing zone. During the first few minutes, over 30 casualties were sustained. Without hesitation, Sp5c. Sasser ran across an open rice paddy through a hail of fire to assist the wounded. After helping one man to safety, was painfully wounded in the left shoulder by fragments of an exploding rocket.

Refusing medical attention, he ran through a barrage of rocket and automatic weapons fire to aid casualties of the initial attack and, after giving them urgently needed treatment, continued to search for other wounded. Despite two additional wounds immobilizing his legs, he dragged himself through the mud toward another soldier 100 meters away. Although in agonizing pain and faint from loss of blood, Spc5.

Sasser reached the man, treated him, and proceeded on to encourage another group of soldiers to crawl 200 meters to relative safety. There he attended their wounds for five hours until they were evacuated.” After leaving the army, Sasser returned to college as a chemistry student. He then worked for an oil refinery for more than five years before being employed by the U.S. Department of Veterans Affairs. A statue depicting Sasser in Vietnam was unveiled in 2010 in front of the Brazoria County, Texas courthouse.