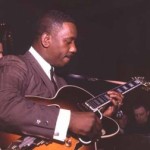 Montgomery started playing the guitar at the age of 19 and initially recorded with his two brothers as the Montgomery Brothers.

Montgomery is considered the founder of the smooth jazz school and a significant influence on other jazz guitarist, including Pat Metheny, George Benson, and Kenny Burrell. Montgomery died June 15, 1968 and was posthumously inducted into the Down Beat Jazz Hall of Fame that same year. Wes Montgomery Park in Indianapolis is named in his honor.