By Chimsima Zuhri on May 19, 2011 in Acting, African American History, May 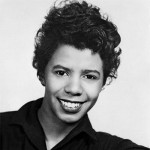 May 19, 1930 Lorraine Hansberry, playwright and author, was born in Chicago, Illinois.

In 1950, Hansberry moved to New York City to pursue a career as a writer and in 1959 her play, “A Raisin in the Sun,” debuted on Broadway. It was the first play written by an African American woman to be produced on Broadway. The play received the New York Drama Critic Award for Best Play of the Year, making Hansberry the youngest playwright and the fifth woman to receive the award.

Her only other play to be produced on Broadway was “The Sign in Sidney Bustein’s Window” (1965). After her death on January 12, 1965, her husband completed several of her unfinished manuscripts, including “To Be Young, Gifted and Black” (1969) and “Les Blancs” (1994). The Lorraine Hansberry Theater in San Francisco is named in her honor. Her biography, “They Found a Way: Lorraine Hansberry,” was published in 1978.