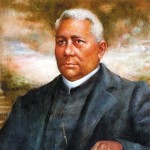 At that time, the law prohibited a black child to be taught to read or write, therefore Turner taught himself. In 1853, he received his license to preach and during the Civil War was appointed a chaplain to one of the first regiments of black troops.

After the war, Turner became a proponent of the Back to Africa movement and he traveled to Africa where he was struck by the differences in the attitude of Africans who had never known the degradation of slavery. Turner also preached that God was black, stating “We have as much right biblically and otherwise to believe that God is a Negro, as you buckra or White people have to believe that God is a fine looking, symmetrical and ornamented White man.”