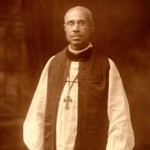 Delany graduated in theology from Saint Augustine’s School (now college) in 1885. After graduating, he joined the faculty of the school where he taught until 1908.

Delany joined Ambrose Episcopal Church and steadily rose in the Episcopal Church hierarchy, becoming a deacon in 1889, a priest in 1892, an archdeacon in 1908, and a bishop in 1918, the first African American bishop elected in North Carolina. He was also active in promoting education among North Carolina’s African American community, helping to organize schools for blacks throughout the state. He also worked to bring educational opportunities to black prisoners in local jails.

Although not formally trained as an architect, in 1895 Delany designed Saint Augustine’s chapel, the only surviving 19th century building on campus. In 1911, Shaw University awarded Delany an honorary doctorate of divinity degree. Delany died April 14, 1928. He was the father of Sadie and Bessie Delany who in 1993 published their joint autobiography “Having Our Say: The Delany Sisters’ First 100 Years.”