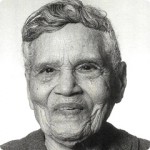 Delany was born September 19, 1889 in Lynch Station, Virginia. She graduated from Saint Augustine’s School (now college) in 1910 and moved to New York City in 1916 where she began teaching for the public school system.

She earned her bachelor and master’s degrees from Columbia University in 1920 and 1925, respectively. Delany was the first black person permitted to teach domestic science at the high school level in New York public schools. She retired from teaching in 1960. In 1993, Delany and her sister Bessie published “Having Our Say: The Delany Sisters’ First 100 Years” which dealt with the trials and tribulations the sisters had faced during their century of life.

The book was on the New York Times hardcover best seller list for 28 weeks and on the paperback list for 77 weeks. In 1999, the book was made into a television movie. In 1994, the sisters published “The Delany Sisters’ Book of Everyday Wisdom” and after Bessie’s death, Delany in 1997 published “On My Own at 107: Reflections on Life Without Bessie.” In 1993, Delany and her sister Bessie were included in the Guinness Book of World Records as the world’s oldest authors.