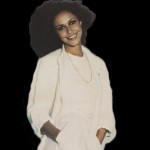 After being voted one of People Magazine’s “50 Most Beautiful People in the World” in 1995, McKee did a two year stint on the television soap opera “As the World Turns.” McKee serves as an adjunct professor at Centenary College.