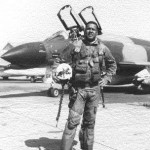 James was born February 11, 1920 in Pensacola, Florida. He earned his Bachelor of Science degree from Tuskegee Institute in 1942.

During World War II, he trained pilots, but during the Korean War he flew 101 combat missions. In 1957, James graduated from the Air Command and Staff College and over the next ten years served in a number of assignments. During the Vietnam War, James flew 78 combat missions, including “Operation Bolo” in which seven Communist planes were destroyed, the highest total kill of any mission during the war.

In 1975, James was promoted to commander in chief, NORAD/ADCOM, where he had operational command of all United States and Canadian strategic aerospace defense forces. During his career, James received the Distinguished Service Medal, Legion of Merit, and the Distinguished Flying Cross. James retired from the Air Force three weeks prior to his death. Several biographies have been published about James, including “Black Eagle, General Daniel “Chappie” James, Jr.” (1985) and “Chappie: America’s First Four-Star General: The Life and Times of Daniel James, Jr.” (1992).