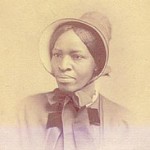 Smith was born enslaved January 23, 1837 in Long Green, Maryland. As a child, her father worked for years to save enough money to buy his family’s freedom and when she was 13 she moved to Pennsylvania to work.

Smith became well known for her beautiful voice and evangelized throughout the South and the West. In 1876, she was invited to speak and sing in England and ended up staying for a year and a half conducting religious services. After her return to the United States, she founded the Amanda Smith Orphan’s Home for African American children in a suburb of Chicago, Illinois. She continued to evangelize and became known as “God’s image carved in ebony.”

In 1893, her autobiography, “The Story of the Lord’s Dealings with Mrs. Amanda Smith, the Colored Evangelist,” was published. Smith retired to Florida in 1912 where she lived until her death.