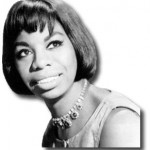 Simone recorded her last album, “A Single Woman,” in 1993. Simone performed and spoke at many civil rights events, including the Selma to Montgomery March, and her songs often contained civil rights messages. Her regal bearing and commanding stage presence earned her the title “High Priestess of Soul.” Simone left the United States in 1970 for Barbados and Europe before settling in France where she died. Her autobiography, “I Put a Spell on You,” was published in 1992.