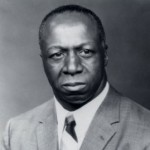 Holland was born January 9, 1916 in Auburn, New York. He graduated from Cornell University, where he was the first African American to play on the football team and an All-American in 1937, 1938, and 1939. Despite his athletic abilities, the National Football League ignored him because of his race. Holland earned his master’s degree in sociology from Cornell in 1941 and his Ph.D. in sociology from the University of Pennsylvania in 1950.

Holland served as president of Delaware State College from 1953 to 1959 and of Hampton Institute from 1960 to 1970. In 1970, President Richard Nixon appointed him ambassador to Sweden, a position he held for two years. In 1972, Holland became the first African American to sit on the board of the New York Stock Exchange, a position he held until 1980. Holland also served on the boards of several major corporations, including AT&T and General Motors. He served as chairman of the American Red Cross Board of Governors from 1980 to 1985 and its blood laboratory is named in his honor.

Holland was inducted into the College Football Hall of Fame in 1965 and in 1972 the National Collegiate Athletic Association awarded him the Theodore Roosevelt Award, the highest honor conferred on an individual by that organization. On May 23, 1985, Holland was posthumously awarded the Presidential Medal of Freedom, the highest civilian award in the United States, by President Ronald Reagan.