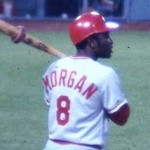 Morgan was signed by the Houston Colt .45’s as an amateur free agent in 1962 and made his Major League debut with them in September, 1963. Morgan was traded to the Cincinnati Reds in 1971 in what many consider to be one of the worst trades in Houston history.

In the “New Bill James Historical Baseball Abstract,” James named Morgan the best second baseman in baseball history. Morgan was inducted into the Baseball Hall of Fame in 1990 and he is currently a commentator for ESPN television and radio.