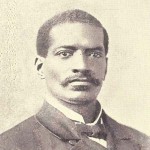 Turner was born enslaved on May 16, 1840 in St. Louis, Missouri. Turner and his parents were freed when he was young but he still had limited educational opportunities because Missouri State laws restricted Blacks from learning to read. Despite the legal obstacles, Turner learned to read and briefly attended Oberlin College.

After the Civil War, Turner became a prominent politician, known for his speaking ability. He worked for the Missouri Department of Education, establishing over 30 new schools in the state for African Americans and providing support for Lincoln Institute. In 1871, President Ulysses S. Grant appointed Turner United States Minister to Liberia, the first African American to hold that position.

After returning from Liberia in 1878, Turner organized the Colored Emigration Aid Association to provide assistants to Blacks migrating from the South. He also fought to secure equal tribal rights for Blacks formerly enslaved by the Cherokee Indians.