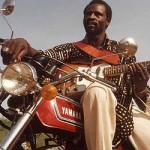 October 31, 1939 Ali Ibrahim “Farka” Toure, guitarist, singer and one of Africa’s most internationally renowned musicians, was born in Timbuktu, Mali.

Toure was the first African bluesman to achieve widespread popularity in Africa and was often called “the African John Lee Hooker.” He appeared in the 2003 documentary “Feel Like Going Home” which traced the roots of the blues back to its genesis in West Africa. He won the Grammy Award for Best Traditional World Music Album in 1994 for “Talking Timbuktu” and in 2005 for “In the Heart of the Moon.”

In 2004, Toure became mayor of the 53 villages of the Niafunke region of Mali and used his own money to grade the roads, put in sewer canals, and provide the fuel for the generator that provided electricity. In Mali, he was considered a national hero and when he died on March 7, 2006 the government radio stations suspended regular programming to play his music. His last album, “Savane,” was released posthumously and was chosen Album of the Year in 2006 by a panel of experts from the World Music Chart Europe.