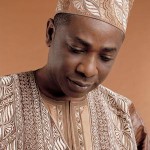 N’Dour began performing at the age of 12 and within a couple of years was performing with the most popular group in Dakar. In 1979, he formed his own ensemble which by 1981 had evolved into Super Etoile de Dakar, the most famous band in Africa. In 2005, N’Dour won the Grammy Award for Best Contemporary World Music for his album “Egypt.”

Other albums by N’Dour include “The Lion” (1989), “Eyes Open” (1992), “St. Louis” (2000), and “Dakar-Kingston” (2010). N’Dour is one of the most celebrated African musicians in history with an international fan base of millions. The New York Times described his voice as an “arresting tenor, a supple weapon deployed with prophetic authority.” In Senegal, he is a powerful cultural icon actively involved in social issues.

N’Dour wrote and performed the official anthem of the 1998 International Federation of Association Football (FIFA) World Cup and in 2000 he was appointed Goodwill Ambassador of the Food and Agriculture Organization of the United Nations. He also owns a recording studio, a record label, one of the largest circulation newspapers in Senegal, and a radio station.