October 1st in African American History – The “Thrilla in Manila” 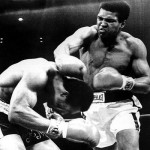 The “Thrilla in Manila”

October 1, 1975 The “Thrilla in Manila,” the third and final boxing match between Muhammad Ali and Joe Frazier for the Heavyweight Boxing Championship of the World, was fought in Manila, Philippines.

Both men battled each other into near incapacity before Frazier’s trainer stopped the fight after the fourteenth round and Ali was declared the winner by a technical knockout (TKO). The bout is considered one of the greatest fights of the 20th century. The “Ali Mall,” the first multi-level commercial shopping mall in the Philippines, was named after Ali as a tribute to his victory.