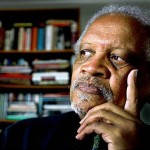 Reed attended the University of Buffalo before moving to New York City in 1962 and co-founding the “East Village Other,” a well know underground publication.

Reed’s works include nine novels, including “The Free Lance Pallbearers” (1967), six collections of poetry, eight collections of essays, including “Mixing It Up: Taking on the Media and Other Reflections” (2008), and six plays. Reed also has edited 13 anthologies, most recently “POW WOW, Charting the Fault Lines in the American Experience-Short Fiction from Then to Now” (2009).

Two of his books have been nominated for the National Book Awards and a book of poetry, “Conjure” (1972), was nominated for a Pulitzer Prize. Reed received the Langston Hughes Medal in 1995, the John D. and Catherine T. MacArthur Foundation “Genius” Award in 1998, and the Phillis Wheatley Award in 2004. He retired in 2005 from the University of California where he taught for 35 years.