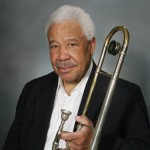 McIntosh played trombone in an army band and graduated from Juilliard in 1958.

Between 1956 and the mid-1960s, he played with such artists as Lee Morgan, Roland Kirk, James Moody, Art Farmer, and Benny Golson. In 1963, he composed music for Dizzy Gillespie’s “Something Old, Something New.” In 1969, McIntosh gave up jazz and moved to Los Angeles, California to pursue a career in film and television composing.

Movies that he wrote music for include “The Learning Tree” (1969), “Shaft’s Big Score” (1972), and “A Hero Ain’t Nothin’ but a Sandwich” (1978). McIntosh was designated a NEA Jazz Master, the highest honor the United States bestows on a jazz musician, by the National Endowment for the Arts in 2008.