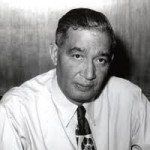 Jones was born May 17, 1893 in Cincinnati, Ohio. He boosted his natural mechanical ability and inventive mind with independent reading and study.

In 1912, Jones moved to Hallock, Minnesota and after serving in the United States Army during World War I, taught himself electronics and built a transmitter for the town’s radio station. Around 1935, Jones designed a portable air-cooling unit for trucks carrying perishable food and received patent number 2,303,857 for it on July 12, 1940. His air coolers made it possible for the first time to ship perishable food long distances during any time of the year.

His units were also important during World War II, preserving blood, medicine, and food. During his lifetime, Jones was awarded 61 patents, mostly for refrigeration equipment but also for portable X-ray machines, sound equipment, and gasoline engines. In 1944, Jones became the first African American to be elected into the American Society of Refrigeration Engineers.

In 1991, Jones was posthumously awarded the National Medal of Technology by President George H. W. Bush, the first African American to receive the award. Biographies of Jones include “Man With a Million Ideas: Fred Jones, Genius/Inventor” (1976) and “I’ve Got an Idea: The Story of Frederick McKinley Jones” (1994).