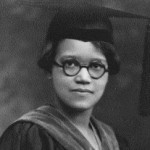 In 1927, Alexander became the first African American woman to graduate from the University of Pennsylvania Law School and be admitted to the Pennsylvania Bar. From 1919 to 1923, Alexander served as the first national president of Delta Sigma Theta Sorority. From 1928 to 1930 and from 1934 to 1938, she served as assistant city solicitor for the City of Philadelphia.

In 1947, she was appointed to President Harry Truman’s Committee on Human Rights and from 1952 to 1968 she served on the Commission on Human Relations of the City of Philadelphia. Alexander retired in 1982. An elementary school, the Sadie Tanner Mossell Alexander University of Pennsylvania Partnership School, is named in her honor.