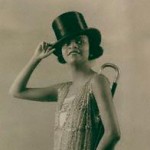 Mills was born Florence Winfrey on January 25, 1896 in Washington, D. C. She began performing at the age of four and made her vaudeville debut with her two sisters as The Mills Trio. Mills made her stage musical debut in “Shuffle Along” in 1921.

She then appeared in “Plantation Revue” (1922), “Greenwich Village Follies” (1923), and “Dixie to Broadway” (1924). Mills became an international superstar after starring in “Lew Leslie’s Blackbirds” in 1926. Mills was considered the preeminent jazz dancer of the Harlem Renaissance.

The Florence Mills House in Harlem, New York is maintained as a landmark by the National Park Service.