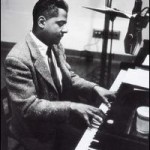 Wilson was born November 24, 1912 in Austin, Texas. He studied piano and violin at Tuskegee Institute. In 1935, Wilson joined the Benny Goodman Trio, becoming the first black musician to perform in public with a previously all-white group.

Wilson recorded 50 hit records with various singers such as Lena Horne and Billie Holiday. His albums include “I Got Rhythm” (1956), “Pres and Teddy” (1956), and “With Billie in Mind” (1972). Wilson was designated a NEA Jazz Master by the National Endowment for the Arts in 1986 and was posthumously inducted into the Down Beat Jazz Hall of Fame in 1987. He is considered one of the most influential jazz pianists of his time.