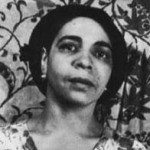 Walker was born April 13, 1891 in Chicago, Illinois. As a child, she lived for several years with her mother’s relatives in Denmark and in 1907 she briefly attended Fisk University. In 1915, Walker graduated from the all-black nursing school at Lincoln Hospital and went to work at the Tuskegee Institute where she became head nurse at a hospital and training school.

She returned to New York in 1916 and began to publish her first short stories in 1920. In 1928, Walker published “Quicksand,” an autobiographical novel that received critical acclaim, and in 1929 she published “Passing,” which also garnered critical acclaim. After traveling Europe for several years on a Guggenheim Fellowship, Walker returned to nursing.