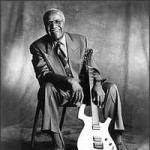 Staples was born December 28, 1914 on a cotton plantation near Winona, Mississippi. He dropped out of school after the eighth grade. In 1935, he moved to Chicago, Illinois where he sang with the Trumpet Jubilees. In 1948, he formed The Staple Singers with his children as a gospel group and they started recording in the early 1950s with songs such as “This May Be the Last Time” and “Uncloudy Day.”