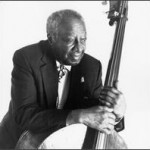 Hinton was born June 23, 1910 in Vicksburg, Mississippi. While attending high school, he learned to play the bass horn, tuba, cello, and the double bass. In the late 1920s and early 1930s, he worked as a freelance musician in Chicago, Illinois, playing with famous jazz musicians such as Jabbo Smith and Art Tatum.

In 1936, he joined the Cab Calloway band and played with them until 1951. Hinton later became a television staff musician, working regularly on shows with Jackie Gleason and Dick Cavett. Hinton’s biography, “Bass Line,” was published in 1988 and in 1993 he was designated a NEA Jazz Master, the highest honor the United States bestows on a jazz musician, by the National Endowment for the Arts. Hinton is recognized as the most recorded jazz musician of all time, having appeared on 1,174 recordings. He was posthumously inducted into the Down Beat Jazz Hall of Fame in 2001.