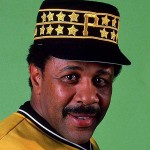 Stargell was signed by the Pittsburg Pirates at the age of 18 and made his major league debut in 1962.

Over his 21 season professional career with the Pirates, Stargell was the 1979 National League Most Valuable Player, a 7-time All-Star, 2-time World Series champion, and in 1974 won the Roberto Clemente Award which is given to the player that best exemplifies the game of baseball, sportsmanship, community involvement and the individual’s contribution to his team.

Stargell retired in 1982 and was inducted into the Baseball Hall of Fame in 1988. He published his autobiography, “Willie Stargell,” in 1984. Stargell died April 9, 2001, the same day that a larger-than-life statue of him was unveiled outside the Pirate’s new PNC Park stadium. The Willie Stargell Foundation provides funds to support kidney disease research and treatment.