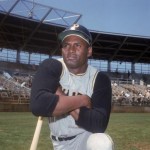 Clemente was born August 18, 1934 in Carolina, Puerto Rico. He was drafted by the Pittsburg Pirates in 1954 and played 18 seasons with the team. During his career, he was a 12-time All-Star, won 12 Gold Glove Awards, led the league in batting average four times, and won the National League Most Valuable Player Award in 1966.

After his death, the Baseball Hall of Fame waived the rule requiring a five year waiting period after the end of a player’s career and Clemente was posthumously inducted into the hall of fame in 1973, the first Hispanic player to be inducted. Major League Baseball annually presents the Roberto Clemente Award to the player that best exemplifies Clemente’s humanitarian work.

In 1973, Clemente was posthumously awarded the Presidential Citizens Medal and in 2003 was awarded the Presidential Medal of Freedom, the United States highest civilian honor, by President George W. Bush. Roberto Clemente Middle School in Germantown, Maryland and Roberto Clemente High School in Chicago, Illinois are named in his honor. Clemente’s biography, “Clemente: The Passion and Grace of Baseball’s Last Hero,” was published in 2006.