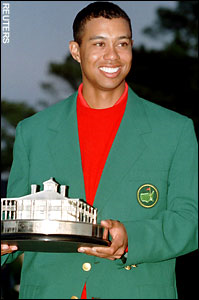 This date is notable because he made history as both the first African American and the youngest Masters champion. Most golfers can only dream of winning the Masters; yet, Tiger Woods, on this date in 1997, did so in only his second season playing as a professional.

Throughout his distinguished athletic career, Woods has been one of the most successful players in golf history. Fans can usually find Tiger ranked the top player in the world. The child of an African American father and Thai mother, Tiger Woods dominates a sport that has traditionally lacked racial diversity.

Such a high profile comes at a price. During 2009 and 2010, a marriage infidelity scandal caused several major corporations to rescind their sponsorship agreements with Tiger Woods. Nevertheless, the seemingly intrepid Woods regained form after a brief hiatus from the sport to become the number one golfer again by March 2013.

Eldrick Tont “Tiger” Woods was born on December 30, 1975 to Earl and Kultida Woods in Cypress, California. Earl and Kultida met in Thailand in 1968. At the time, Earl was a commissioned Army officer serving on duty in the Vietnam War. The couple gave their son the nickname “Tiger” in honor of a close friend Earl had during his military service.

Tiger Woods’ victory in the 1997 Masters Golf Tournament solidified his role as one of the top players in the history of the sport. He was able to dominate the field, finishing play with a twelve-stroke advantage over the closest competitor. For the African American community, the Woods Masters championship had added significance. The tournament site, the elite Augusta National Golf Club in Georgia, has a long history of racial segregation, admitting its first black member only in 1990. With this win, Tiger Woods symbolized the changing complexion of the PGA Tour and golf in general.

Woods has been the source of much publicity, some negative. For example, some African Americans took offense to his claim to being of “Cablinasian,” ethnicity in an interview with Oprah Winfrey. By employing this term, he intended to honor his mixed-race, Caucasian, Black and Asian heritages. Perhaps more prominent were the 2009 revelations of extramarital affairs that eventually led to a divorce with his then-wife of six years, Elin Nordegren.

Despite the few downfalls, Tiger Woods today has maintained a perennial spot as the top golfer on the PGA Tour. He is undoubtedly the PGA’s most recognizable member.