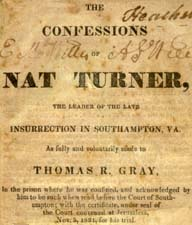 The Nat Turner Rebellion resulted in the deaths of over 55 whites and 255 slaves. Turner’s band of rebels numbered 70, so most of the slaves killed had nothing to do with the rebellion. After Nat Turners Rebellion, slave owner fear of future disturbances led to increased vigilance. The South increasingly became a militarized zone, with slave patrols harassing any African Americans outside their plantation grounds. In the end, the Nat Turner Rebellion, though ultimately unsuccessful in its aim of initiating a widespread revolt, challenged the notion of the happy African American slave often presented by slave owners to justify their peculiar institution.

Nat Turner seemed destined to lead a slave rebellion. October 2, 1800, his date of birth, came only a few days before the execution of the slave Gabriel, also known as Gabriel Prosser, in Richmond, Virginia. Gabriel’s thwarted uprising would have been the largest slave rebellion in the history of slavery in America. Local slaves recalled hearing a young Nat Turner referring to events that happened before his birth or in places far from Virginia. For these reasons, slaves in Southampton, Virginia, beheld Turner as a prophet. Turner became a preacher, a position of leadership held usually by one of the more intelligent slaves on a plantation.

The road toward slave rebellion began for Nat Turner with what he perceived as five visions. In 1821, Turner, then a runaway, claims the Holy Spirit appeared and told him to return to his master. It was not yet time for action against the slave system, the Holy Spirit announced. The second vision appeared in 1824 when Turner found leaves stained in blood. The Holy Spirit again appeared to Turner in 1828, while he worked hard in the fields, informing him the time to rebel against slavery had come, he later claimed. Then in February 11, 1831, Turner interpreted a solar eclipse as the final sign that God wanted African Americans to use their hands to slay the white slave masters. As he and a few friends debated the plan, Turner postponed the rebellion, originally set for July 4, 1831. When the August 13, 1831, solar eclipse appeared, Turner interpreted the event as the final sign from God to begin the rebellion. Scientists now believe the eclipse to be the atmospheric conditions after the eruption of the Mt. Saint Helens Volcano. Turner informed his companions that the rebellion would take place the next week on August 21, 1831.

Nat Turner began his rebellion with a band of men now numbering seven. As weapons, the slaves planned to use axes and knives. Their objective was to kill slave owners, recruit additional slaves and capture an arsenal of guns. Turner thought it prophetic that the local arsenal was in Jerusalem, the seat of Southampton County. At two in the morning, Turner entered the home of his owner, Joseph Travis, with his co-conspirators. The men killed the entire family, all of whom lay asleep in bed. The carnage continued for two days. Over 70 slaves and free blacks joined the slave rebellion. Turner later admitted to killing only one white person. A total of 55 whites lay dead at the hands of the rebels. The state militia cornered the men outside Jerusalem, capturing or killing most of them. Turner escaped and spent six weeks hiding in nearby woods. Turner’s famous capture occurred on October 30. Virginia authorities hanged Nat Turner on November 11, 1831, for his leadership of the bloodiest revolt in the history of slavery in the United States.