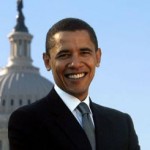 Following the announcement of Obama’s victory, spontaneous celebrations broke out in cities across the United States and around the world.