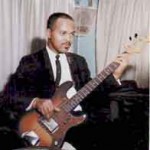 Jamerson and his mother moved to Detroit, Michigan in 1954. He learned to play the bass at Northwestern High School and soon began playing in blues and jazz clubs. In 1959, he joined Motown and he is reported to have played on 95% of Motown recordings between 1962 and 1968.