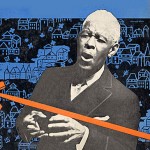 Hayes was born June 3, 1887 in Curryville, Georgia. He began publicly performing with the Fisk Jubilee Singers in 1911. From 1916 to 1919, he toured throughout the United States, arranging his own recitals. Hayes made his London debut in 1920 and soon was performing throughout Europe.

By 1923, when he returned to the U. S., he was famous and reportedly was making $100,000 a year. Critics lauded his abilities and linguistic skills with songs in French, German, and Italian. In 1924, he was awarded the Spingarn Medal by the NAACP. In 1948, Hayes published a collection of spirituals, “My Songs: Aframerican Religious Folk Songs Arranged and Interpreted.” In 1982, The University of Tennessee opened the Roland W. Hayes Concert Hall and there are Roland Hayes Schools of Music in New York City and Boston, Massachusetts. Hayes published his autobiography, “Angel Mo’ and Her Son, Roland Hayes,” in 1942 and in 1990 the documentary “The Musical Legacy of Roland Hayes” was televised.