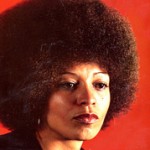 In 1970, Davis was charged as an accomplice in the murder of a judge and became the third woman to appear on the FBI’s Ten Most Wanted Fugitives List. At her 1972 trial, a jury acquitted her of all charges. Throughout the 1980s and 1990s, Davis taught at several universities and continued her political activism. A principle focus of her current activism is the state of prisons in the United States. She has also authored several books, including “Angela Davis, An Autobiography” (1974), “Women, Race and Class” (1983), and “Women, Culture and Politics” (1989).