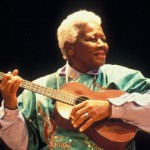 August 6, 1924 Ella Jenkins, folk singer and “The First Lady of the Children’s Folk Song,” was born in St. Louis, Missouri but grew up in Chicago, Illinois.

In 1951, Jenkins earned her Bachelor of Arts degree in sociology with minors in child psychology and recreation from San Francisco State University.

Jenkins is not only an important force in children’s lives, but also has taught her approach to working with children to parents and fellow music educators. Jenkins received the Life In Music Award from the American Society of Composers, Authors, and Publishers Foundation (ASCAP) in 1999, becoming the first woman and the first recipient in the field of children’s music, and the Grammy Lifetime Achievement Award in 2004.