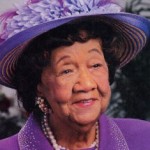 While in high school, Height was awarded a scholarship to Barnard College, but when she enrolled she was denied admittance because at that time Barnard only admitted two African Americans per academic year and they had already admitted two.

Height then pursued studies at New York University where she earned her Bachelor of Arts and Master of Arts degrees in psychology. Height started working as a case worker with the New York City Welfare Department and in 1944 joined the national staff of the YWCA. From 1946 to 1957, she also served as the national president of Delta Sigma Theta Sorority. In 1957, Height was named president of the National Council of Negro Women, a position she held until 1997.

Height has served on numerous committees, including the President’s Committee on the Employment of the Handicapped and the President’s Committee on the Status of Women. In 1974, Height was named to the National Council for the Protection of Human Subjects of Biomedical and Behavioral Research, established in response to the “Tuskegee Syphillis Study.” Height also served as the chairperson of the Executive Committee of the Leadership Conference on Civil Rights. She received many awards and honors, including the Presidential Citizens Medal in 1989, the NAACP Spingarn Medal in 1993, and the Presidential Medal of Freedom, the nation’s highest civilian honor, from President William Clinton in 1994.

Height was presented the Congressional Gold Medal by President George W. Bush in 2004. She was inducted into the National Women’s Hall of Fame in 1993. Height died April 20, 2010. She published her autobiography, “Open Wide the Freedom Gates: A Memoir,” in 2005.