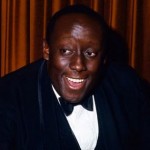 Cambridge won a four-year scholarship to study medicine, but instead decided to become an actor, leaving college in his third year.

He made his Broadway debut in “Nature’s Way” (1951) and later appeared in “The Blacks” (1961), a performance that earned him the Obie Award for Best Supporting or Featured Dramatic Actor. In 1962, his performance in “Purlie Victorious” earned him the Tony Award nomination for Distinguished Performance Actor.

In 1967, he appeared on screen in “The President’s Analyst” and in 1970 in “Watermelon Man” and “Cotton Comes to Harlem.” Cambridge also appeared on numerous television shows as a stand-up comedian. Cambridge died on November 29, 1976 while on the set of the movie “Victory at Entebbe.”