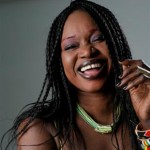 February 25, 1968 Oumou Sangare, the “songbird of Wassoulou,” was born in Bamako, Mali.

Sangare was recognized as a gifted singer at the age of five and at 16 she was touring.

In 1991, she recorded her first album, Moussolou” which sold more than 200,000 copies in Africa. Other albums include “Oumou” (2004) and “Seya” (2009). Sangare is considered an ambassador of Wassoulou, a historical region south of the Niger River. She is an advocate for women’s rights, opposing child marriages and polygamy.

In 2001, Sangare won the UNESCO Prize for her contribution to “the enrichment and the development of music as well as for the cause of peace” and in 2003 she was appointed goodwill ambassador for the Food and Agriculture Organization of the United Nations.