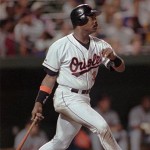 Murray was selected by the Baltimore Orioles in the 1973 amateur draft.

He made his major league debut in 1977 and won the American League Rookie of the Year Award. Over his 21 season professional career, Murray was an eight-time All-Star and three-time Gold Glove Award winner. He retired in 1997 with 3,255 hits and 504 home runs and in 2003 was inducted into the Baseball Hall of Fame.

After retiring, Murray served as hitting coach for the Cleveland Indians and Los Angeles Dodgers. As the result of a significant donation by Murray, the Carrie Murray Nature Center in Baltimore, Maryland is named in honor of his mother.