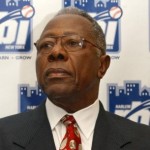 Aaron started his professional baseball career in 1951 with the Indianapolis Clowns of the Negro American League. In 1952, he signed a contract with the Boston (later to be the Atlanta) Braves and made his Major League Baseball debut in 1954.

Over his 21 season Major League career Aaron performed at a consistently high level for an extended period of time and is generally considered one of the greatest players of all time. Aaron was a 21-time All-Star selection, 3-time Gold Glove Award winner, and the 1957 National League Most Valuable Player. His uniform number 44 was retired by both the Atlanta Braves and Milwaukee Brewers. He holds the Major League records for most total bases, most runs batted in, most extra base hits, and most consecutive seasons with 150 or more hits. Aaron retired after the 1976 season and was inducted into the Baseball Hall of Fame in 1982.

Aaron was the 1975 recipient of the NAACP Spingarn Medal. Aaron has remained active with baseball serving in several upper-level positions in the Atlanta Braves organization. In 1990, he published his autobiography, “I Had a Hammer.” In 1999, Major League Baseball announced the Hank Aaron Award to honor the best overall offensive performer in both leagues.