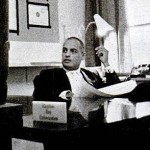 Olden was born November 13, 1920 in Birmingham, Alabama, but raised in Washington, D.C. Olden excelled at art from a young age and while still in high school drew cartoons and served as Art Director for a black biweekly magazine.

In 1945, Olden joined the CBS Television Network as Art Director. At the same time, he was invited to the conference that led to the establishment of the United Nations where he was selected to serve as graphic designer to the International Secretariat. While at CBS, Olden was the first artist to design news graphics and he supervised the vote tallying graphics of the first live presidential election coverage in 1952. He was also in charge of graphics for the most popular CBS television shows, including “The Ed Sullivan Show,” “Lassie,” “Face the Nation,” and “Gunsmoke.”

In 1956, Olden won the New York Art Directors Club medal. In 1960, Olden left CBS to join BBDO advertising agency and in 1963 he joined McCann-Erickson as a vice president and member of the Professional Advisory Council. Also in 1963, he was commissioned by the U.S. Postal Service to design a postage stamp commemorating the Emancipation Proclamation, making him the first black to design a U.S. stamp. In 1964, Olden was one of seven African Americans included at a dinner given by U.S. Representative to the United Nations Adlai Stevenson honoring “Negroes prominent in the economic world.” In 1967, Olden designed another U.S. postage stamp commemorating the Voice of America.