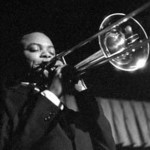 Johnson was born January 22, 1924 in Indianapolis, Indiana. At the age of nine, he started studying the piano, but decided to play the trombone at the age of 14. In 1941, Johnson started his professional career.

He played in Benny Carter’s orchestra from 1942 to 1945, recording his first solo in 1943. In 1945, he joined the Count Basie Band, touring and recording with him until 1946. In 1947, Johnson began recording as the leader of small groups and in 1954 he joined with Kai Winding to set up the Jay and Kai Quintet which was musically and commercially successful. Starting in the early 1960s, Johnson dedicated more time to composing, writing a number of large scale works which incorporated elements of both classical and jazz music.

In 1970 he began to compose for film and television, scoring movies such as “Across 110th Street” (1972), “Cleopatra Jones” (1973), and “Willie Dynamite” (1974), as well as television series such as “Starsky & Hutch” and “The Six Million Dollar Man.” Johnson was inducted into the Down Beat Jazz Hall of Fame in 1995 and designated a NEA Jazz Master, the highest honor the United States bestows upon a jazz musician, by the National Endowment for the Arts in 1996. His autobiography, “The Musical World of J.J. Johnson,” was published in 2000.