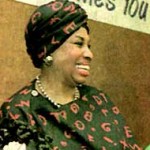 Price earned her Bachelor of Arts degree from Central State College in 1948 and her first important stage performance was in the 1952 production of “Falstaff.”

In 1955, she became the first black to appear in televised opera when she sang the title role in “Tosca” for NBC-TV Opera. Several NBC affiliates cancelled the broadcast in protest. Price made her opera house debut in 1957 in “Dialogues des Carmelites” in San Francisco. In the late 1960s, Price cut back on opera in favor of recitals and concerts. In January, 1973, she sang “Onward Christian Soldier” at the state funeral of President Lyndon Johnson.

Price gave her operatic farewell in 1985 and her last recital in 1997. Also in 1997, she wrote a children’s book version of “Aida,” which became the basis for a hit Broadway musical. Among her many honors are the Presidential Medal of Freedom in 1964, the NAACP Spingarn Medal in 1965, Kennedy Center Honors in 1980, the National Medal of Arts in 1985, numerous honorary degrees, and 19 Grammy Awards, including the Grammy Lifetime Achievement Award in 1989.