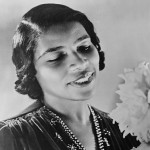 Anderson was born February 27, 1897 in Philadelphia, Pennsylvania. At the age of six, she began singing at local functions for small change. She got her first big break in 1925 when she won a singing competition sponsored by the New York Philharmonic. In 1939, the Daughters of the American Revolution refused permission for Anderson to perform to an integrated audience in Constitution Hall. As a result, with the aid of President and Mrs. Franklin Roosevelt, Anderson performed a critically acclaimed concert on the steps of the Lincoln Memorial to a crowd of more than 75,000 people and a radio audience of millions.

In 1955, Anderson became the first black person to perform at the Metropolitan Opera and in 1963 she sang at the March on Washington for Jobs and Freedom. She also sang for President Dwight Eisenhower’s inauguration in 1957 and President John Kennedy’s in 1961. In 1956, she published her autobiography, “My Lord, What a Morning.” The recipient of numerous awards and honors, Anderson received the NAACP Spingarn Medal in 1939, the Presidential Medal of Freedom in 1963, the Congressional Gold Medal in 1977, the Kennedy Center Honors in 1978, the National Medal of Arts in 1986, a Grammy Lifetime Achievement Award in 1991, and in 1993 the United States Postal Service issued a commemorative postage stamp in her honor.

In 1999, a one act play entitled “My Lord, What a Morning: The Marian Anderson Story” was produced by the Kennedy Center and in 2001 the 1939 documentary film, “Marian Anderson: The Lincoln Memorial Concert” was selected for preservation in the National Film Registry by the Library of Congress as being “culturally, historically, or aesthetically significant.” A number of biographies of Anderson have been published, including “Marian Anderson: A Singers Journey” (2002) and “The Voice that Challenged a Nation: Marian Anderson and the Struggle For Equal Rights” (2004).