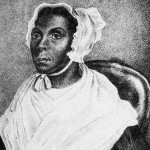 In her early 20’s, Lee was converted, sanctified and called to preach, but her first request for approval was denied. A few years later, Bishop Richard Allen granted her official church approval to preach.

Lee preached throughout New England, Canada, and Ohio. She recounted her experiences in her autobiography, “The Life and Religious Experience of Jarena Lee, A Coloured Lady” (1836), the first to be published in the United States by an African American woman. Nothing is known of her life or death after 1857.