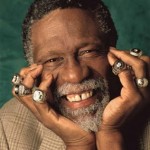 Russell led the University of San Francisco to consecutive NCAA championships in 1955 and 1956 and also earned his Bachelor of Arts degree in 1956.

That same year, he won a Gold medal at the Melbourne Summer Olympic Games as captain of the U.S. basketball team. Russell was selected by the St. Louis Hawks in the 1956 NBA Draft, but traded to the Boston Celtics in what was later called “one of the most important trades in the history of North American sports.” Over his 14 season professional career, Russell was a 12-time All-Star selection and 5-time NBA Most Valuable Player.

His teams won 11 NBA championships, the most by an athlete in a North American sports league. Russell was the first African American player to achieve superstar status in the NBA. From 1966 to 1969, he also served as player/coach for the Celtics, becoming the first African American NBA coach. Russell was inducted into the Naismith Memorial Basketball Hall of Fame in 1974, he was an inaugural inductee into the National Collegiate Basketball Hall of Fame in 2006, and in 2007 he was inducted into the International Basketball Federation (FIBA) Hall of Fame.

In 2009, The NBA announced the Bill Russell NBA Finals Most Valuable Player Award in his honor and in 2011 he was awarded the Presidential Medal of Freedom, the nation’s highest civilian honor, by President Barack Obama. Russell has authored three books, “Second Wind” (1979), “Russell Rules” (2001), and “Red and Me: My Coach, My Lifelong Friend” (2009).