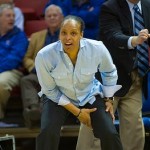 Weatherspoon played college basketball at Louisiana Tech University where she was a two-time All-American. In 1988, she led the team to the NCAA national title and won the Margaret Wade Trophy as the top female basketball player in the country.

After earning her bachelor’s degree in health and physical education, Weatherspoon played professionally overseas for eight years. She also was a member of the Gold medal winning women’s basketball team at the 1988 Seoul Olympic Games and the Bronze medal winning team at the 1992 Barcelona Olympic Games. In 1997, Weatherspoon joined the New York Liberty of the Women’s National Basketball Association.

Over her eight season WNBA career, she was a four-time All-Star and two-time Defensive Player of the Year. In 2009, Weatherspoon was named head women’s basketball coach at Louisiana Tech and in 2010 she was inducted into the Women’s Basketball Hall of Fame.