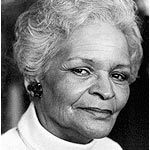 In 1943, Hamilton was appointed executive director of the Atlanta Urban League, a position she held until 1961. Hamilton was elected to the Georgia General Assembly in 1965 and served continuously until 1985. During her tenure, she worked to expand political representation for blacks in city, county, and state government.

Hamilton died June 17, 1992 and in 2006 was posthumously inducted into the Georgia Women of Achievement. Books about Hamilton include “The Public Career of Grace Towns Hamilton, a Citizen Too Busy to Hate” (1976) and “Grace Towns Hamilton and the Politics of Southern Change” (1997).