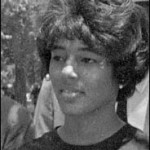 October 13, 2005 Vivian Juanita Malone, one of the first two African Americans to enroll at the University of Alabama, died.

Malone was born July 15, 1942 in Mobile, Alabama. She earned a bachelor’s degree from Alabama A&M but the college lost its accreditation. To get an accredited degree, Malone applied to the University of Alabama and was admitted as a junior. When she and James Hood attempted to enroll on June 11, 1963, Alabama Governor George Wallace blocked the door to Foster Auditorium.

Despite harassment, in 1965 Malone became the first black graduate of the university, earning a Bachelor of Arts degree in business management. She then joined the civil rights division of the United States Department of Justice and in 1996 retired as director of Civil Rights and Urban Affairs and director of Environmental Justice for the U. S. Environmental Protection Agency. In 2000, the University of Alabama bestowed a doctorate of humane letters on her.