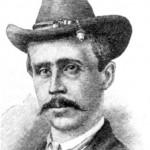 Brown was born in 1841 in Natchez, Mississippi. During the Civil War, he enlisted in the Union Navy and was assigned as a landsman to the USS Hartford.

On August 5, 1864, during the Battle of Mobile Bay, Brown and five other sailors worked on the Hartford’s berth deck loading and operating the shell whip, a device that lifted boxes of gunpowder up to the gun deck. Brown’s citation reads, “Knocked unconscious into the hold of the ship when an enemy shellburst fatally wounded a man on the ladder above him, Brown, upon regaining consciousness, promptly returned to the shell whip on the berth deck and zealously continued to perform his duties through 4 of 6 men at his station had been killed or wounded by the enemy’s terrific fire.” For his actions, Brown was awarded the Medal of Honor on December 31, 1864.